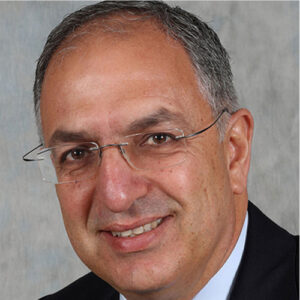 Hon. Costas Kadis is the Minister of Agriculture, Rural Development and Environment. He was the Cypriot Minister of Health from July 2007 to February 2008. He served as Minister of Education and Culture in 2014–2018, and as Minister of Agriculture since 2018. He graduated from the Department of Biology – University of Athens in 1991 and received a PhD from the same Department in 1995. He attended other post graduate courses, including the Intensive Course on “Mediterranean Landscape Ecology” at the International Centre for Advanced Mediterranean Agronomic Studies of the Mediterranean Agronomic Institute of Chania, the “Teaching in Natural Sciences” course at the University of Athens – Faculty of Philosophy, Department of Philosophy, Education and Psychology, and the training course on “Approaches to the administration of publicly funded scientific research in the USA” at Cornell University.

His professional career began at the University of Athens, where he worked as a postgraduate and postdoctoral researcher. In 1996 he returned to Cyprus and joined Enalion Environmental Management Centre of the Cyprus Development Bank, as scientific consultant. In 1998 he joined the Research Promotion Foundation where he held various positions, including Deputy Director General. In 2005 he joined the faculty of Frederick University and established the Nature Conservation Unit within the University. He also served as Dean of the School of Education. Under these capacities, he coordinated numerous research projects and built networks of cooperation with dozens of Universities, research centres and scientists in Cyprus and abroad. He has participated in many local and international professional conferences, where he has presented the results of his scientific work. He is the author and co-author of scientific books, scientific articles published in international journals and proceedings of professional conferences, after peer review, research reports, and studies focusing on the sustainable management of natural resources, biodiversity conservation, and environmental education. He has been member of several scientific committees in the fields of Research and Environment, in Cyprus and abroad.